What’s in Your Washer?

I swear I check pockets before I throw the laundry in, but then again, I’ve been known to wash my  hair more than once because I wasn’t sure if I had used shampoo yet … forget about conditioner … if I don’t remember putting that in I don’t care! And not because I need excuses, but at this moment in time, we are doing an impressive amount of laundry considering my youngsters are just that, YOUNG … but not “poop/pee their pants” young which creates an entirely different level of laundry volume. ** Except for my littlest of course but he’s just over 13-months so his clothes are so tiny they hardly are creating the issue. I digress …

Back to the issue at hand … depsite the fact that I try to check pockets before sending everything into the land of soapy cleansing, there are always a few stow-aways in the laundry load. This past weekend’s laundry was no exception … execept in one particular load there was more than one special visitor … not only did Gimli and Boromir (from Lord of the Rings, of course) catch a ride, but also Optimis Prime, a golden lego spire that I believe is part of a Ninjago-themed set and the wooden knife from our play-kitchen set (A.K.A. Frodo’s sword). I’d like to think that Gimli and Boromir enjoyed getting so very clean, as if you’ve ever watched one of those movies you’d see that despite the fact that an exorbitant amount of time passes (and I’m not just talking about the upwards of 12 hours of your life you lose while watching the trilogy), there is never once a thorough shower taken by any of the characters. 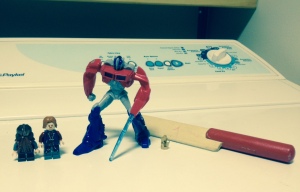 Oh, and of course, my personal favorite, a pull-up diaper jumped into the machine (notice how it’s not really my fault!) so thankfully I was able to re-wash the entire load once I’d removed those dastardly diaper crystals, which I believe reproduce upon human contact like fried rice in one of those Chinese food containers, this time, sans legos and transformers (at least I think!).

The Momster is the mother of three little boys, living in North Carolina. A former bike racer, she currently works stupidly long hours in advertising and marketing, runs stupidly long distances for the sake of sanity and has made it her life mission to find Patience.
View all posts by The Momster →
This entry was posted in Home Life, Stay at Home Moms, Uncategorized, Working Moms and tagged home-life, laundry, working-mom. Bookmark the permalink.